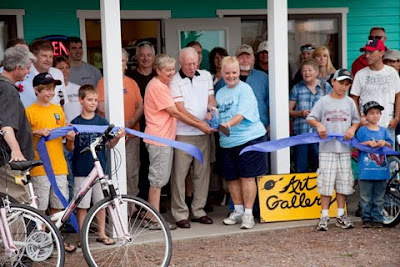 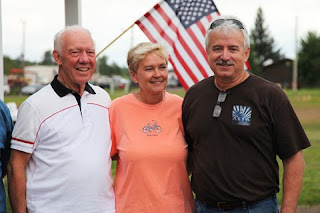 The moment we’d all been waiting for arrived…. The official Ribbon Cutting Ceremony yesterday morning at Carlton Bike Rental. Congressman Jim Oberstar arrived early to tour the new facilities, along with the endless meeting and greeting that goes with such events. All who helped the enterprise were given the privilege of signing the ribbon, which was then ceremoniously cut, followed by a short speech on the importance and value of biking.

Scissors in hand, Congressman Jim began the speech by noting that more bikes than cars were sold last year in America and that the growth of biking has been significant over the course of our lifetimes. What follows are excerpts from this speech. 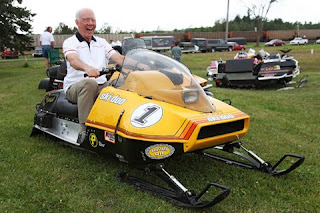 “Most trips by car are 4 miles or less. That is, 60% of all trips by automobiles are 4 miles or less. You could do that easily on a bike. You can have a basket in the front like they do in the Netherlands, in Denmark, in Finland, in Germany, in Spain, and many places in England, and put your groceries in there and take them home. Or you could have a shoulder bag and carry home most things that you need at a grocery store or shopping center. In Copenhagen, 38% of all trips for all purposes are by bicycle. The world's largest pharmaceutical, Novo Nordisk is headquartered in Copenhagen. The CEO of Novo Nordisk rides to work in a bike. His briefcase is in a limousine but the goes in a bike.” 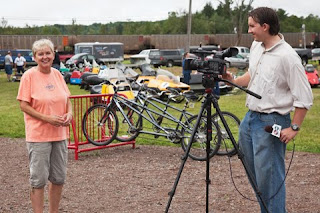 After describing a bicycle ride through Washington D.C. with the Crown Prince of Denmark, the congressman spoke in detail about the origins of the Paul Bunyan Bike Train which has grown from 40,000 users a dozen years ago to 650,000 users today with the corresponding growth of bed and breakfasts, restaurants and other services due to this influx of bikers.

“People drive the 130 miles up from the Twin Cities, they park at the trail head and they have a wonderful, relaxing, reinvigorating weekend. That's what we're seeing. That's what you're part of right here Jolene. Thank you for the initiative, for your vision, seeing this great future for bicycling and enhancing Carlton with this wonderful facility. It’s a complete trail, you have the bikes you have the service, you have food, you have cold drinks, you have everything. All you need is hot days.”

Thank you, Jim.
Photos from yesterday's event courtesy Randy Samarzia. Click images to enlarge.
Posted by Ed Newman at 5:12 AM