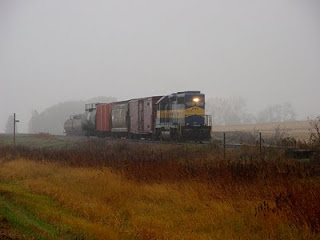 In 1870 the Northern Pacific Railroad decided to finish a stretch of track that would link Duluth to St. Paul. Temporary shacks were erected for the workmen at the place that was soon know as "Northern Pacific Junction". In 1881 this settlement was incorporated as "Carlton". It takes its name from State Senator Ruben Carlton.

This stretch of railroad played an important role in populating Northern Minnesota, which had only recently begun to attract settlers. Free land, if you can make a go of it, was offered to nearly any and all. The harsh winters made the Northland more attractive to Scandinavians and Eastern Europeans than to their Mediterranean peers. Those who came stayed, and those who are here, love the richness of the seasons and the natural beauty that surrounds them.
During the Great Depression Carlton's proximity to "the tracks" gave rise to several hobo enclaves, displaced Americans who rode the rails seeking a new life or a better future. Out of work, but not out of dreams, they pressed on, shared stories and hard times, and found ways to bring one another smiles, and hope. That's why we call this little patch of paradise Hobo Junction.
Today, Carlton is coming alive again as a gathering place. With Jay Cooke State Park up around the bend and 63 miles of biking trails, there are good reasons one might consider making Carlton a stop along the way in your next summer vacation plans. While your here, schedule in a little bike riding. At Carlton Bike Rental we can show you the way. You may even get a hankering to try one of our bicycles built-for-two.
Once you've dropped by you will understand why we believe, Minnesota Starts Here.